On the occasion of the Presentation of the Queen's

and Regimental Colours to Eighth Battalion,

The Colours are the focal point of all that has made the Regiment great. They are consecrated symbols embodying the loyalty, spirit and traditions of the Regiment to which they belong.

The origin of the symbols can be traced to the dim beginnings of history. Over 5000 years ago in India there was a "Cult of the Standard". In the time of Julius Caesar standards were made of metal, but with the advent of the Christian era they were made of cloth, silk or damask.

Early Military Flags were of two types, the personal flag borne in feudal armies when service was rendered to the immediate overlord, and the national or standardised flag as borne by the National or standing armies. The personal aspect was abolished by George 111 in 1743 when a clothing warrant stated "No Colonel shall put his arms, crest device or livery in any part of the appointments of his Regiment". The same warrant directed the "number of the rank of the Regiment" to be painted in the centre of the regimental or second colour thereby inaugurating the regiment aspect. Varying numbers of colours were carried by the Regiment until 1751 when it was decreed that only two colours would carried in future - The King's (or Queen's) and Regimental.

The purpose of the standard was to serve as a rallying point in the field of battle. When his distinctive insignia was held aloft the troops knew the position of their leader. To lose the standard often meant that one's leader was lost. Therefore the importance of "keeping the flag flying" was very great.

With introduction of more modern weapons the casualty rate amongst Colour and Standard Bearers was very high. So high was the mortality rate amongst colour bearers during the Crimean War that in subsequent European wars British Colours were not carried. The Colours were last carried in battle at Laings Nek on 26 January, 1881, in the first Boer War.

The Queen's Colour is a reminder to all ranks of their loyal and duty to their Sovereign and their Country. The Regiment Colour is the symbol of Regimental tradition and of the duty owed by each member to the Regiment. Battle Honours are emblazoned on the Colours.

Before being presented, the Colours are always consecrated a religious ceremony on parade when God's blessing on them asked. This dates back to the battle of the Standard in 1138 when the Yeoman of Yorkshire, fighting the Scots, took with them consecrated banners from York Cathedral, and fought so fiercely to save the banners that they defeated heavy odds. 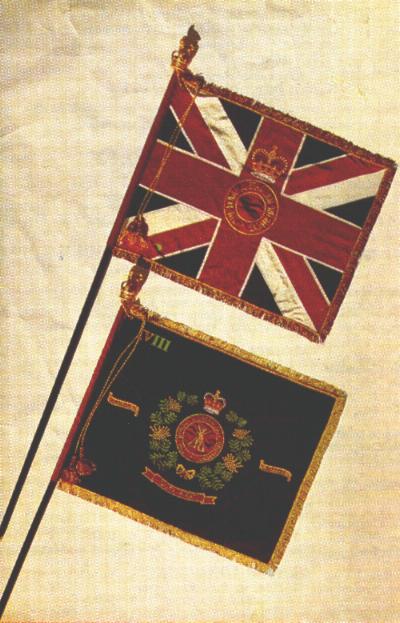 Queen's and Regimental Colours of the Eighth Battalion, The Royal Australian Regiment

THE BAND AND DRUMS

On the occasion of the Presentation of Colours to the Eighth Battalion, The Royal Australian Regiment, by Lieutenant General SIR REGINALD POLLARD, KBE, CB, DSO.

MUSIC FOR
PRESENTATION OF COLOURS

When all is ready, the Commanding Officer shall say:

Forasmuch as men at all times have made for themselves signs and emblems of their allegiance to their rulers, and of their duty to uphold those laws and institutions which God's providence has called them to obey; we, following this ancient and pious custom, and remembering that God Himself led his people into Israel by a pillar of fire by night and a pillar of cloud by day, are met together before God to ask His Blessing on these Colours, which are to represent to us our duty towards our Sovereign and our Country. May they never be unfurled, save in the cause of justice and righteousness; and may God make them to be, to those who follow them, a sign of His presence in all dangers and distresses, and so increase their faith and hope in Him, Who is King of Kings and Lord of Lords.

The Commanding Officer and the Troops shall then say:

C.O.: To the Service of God and the hallowing of His Holy Name;

C.O.: To the love of our Queen and Country, and to the welfare of mankind;

C.O: To the maintenance of honour and sanctity of man's plighted word;

C.O.: To the protection of all those who pass to and fro on their lawful occasions,

C.O.: To the preservation of order and good government;

C.O: To the hallowed memory of our comrades, whose courage and endurance add undying lustre to our emblems:

ALL: We dedicate our Colours.

C.O.: In continual remembrance of our solemn oath and in token of our resolve faithfully and truly to keep it to the end;

ALL: We dedicate our Colours.

The Troops will be called to attention, the spectators standing,,gentlemen removing headdress. The Commanding Officer shall thensay to the Chaplains:

Reverend Sirs, on behalf of the Eighth Battalion, The Royal Australian Regiment we ask you to bid God's blessing on these Colours.

Each Chaplain on the Parade will then in turn move forward toConsecrate, Bless or Dedicate the Colours.

Chaplain B. ASHWORTH, representing the Chaplain General, Church of England, laying his hand on the Colours, shall say:

In the Name of the Father, and of the Son, and of the Holy Spirit, we do consecrate and set apart these Colours, that they may be a sign of our duty towards our Queen and our Country in the sight of God, Amen.

Bless, 0 Lord, these Colours which we bless in Thy Name, that those who follow them, may be ever mindful of Thy Presence, guided by Thy Will, and guarded by Thy Providence.

Making the Sign of the Cross over the Colours he continues:

The Colours are now sprinkled with Holy Water.

In the Name of the Father, and of the Son, and of the Holy Spirit, we do dedicate and set apart these Colours, that they may be a sign of our duty towards our Queen and our Country in the sight of God, Amen.

The Troops will be stood at ease.

Then all on Parade shall say together:

Who beholdest all the kingdom of the earth; have regard unto our land; that it may continue a place and a people; who serve Thee to the end of time.

Grant that all who live beneath our flag: may be so mindful of its crosses: that they may work for the good of others: according to the example of Him Who died upon a cross in the service of men.

Let Thy gracious favour rest on all: who shall follow the Colours now about to be committed to our trust. May our courage ever rest on our sure confidence in Thee. May we show selfcontrol in the hour of success: and patience in the time of adversity.

May our honour lie: in seeking the honour and glory of Thy great name: through Jesus Christ: our Lord, Amen.

And also: The Lords Prayer.

Spectators may now resume their seats.

The Eighth Battalion of The Royal Australian Regiment was officially raised at Enoggera, Brisbane, on the 8th August 1966. The present Commanding Officer Lieutenant Colonel J.0. Langtry, DCM, the Regimental Sergeant Major Warrant Officer Class One G.J.C. Lee and one hundred and fifty ex-members of the First Battalion of The Royal Australian Regiment, which had just returned from Vietnam, were included amongst the foundation members. At 8.00 a.m. on the eighth day of the eighth month 1966, the General Officer Commanding Northern Command, Major General T.F. Cape, CBE, DSO, reviewed the Inauguration Parade.

PREPARATION FOR SERVICE IN MALAYSIA

Early in 1967 the Eighth Battalion was warned for service in the Far East Strategic Reserve. Battalion training for this role was completed by the Battalion's first birthday on the 8th August 1967. In fact, the birthday celebrations themselves were limited to a post exercise party in the Rockhamption training area, Queensland.

Following a brief leave period, a Farewell Parade, reviewed by Brigadier R.L. Hughes, DSO, was held at Enoggera on the Ist September 1967.

The Battalion moved from Brisbane to Malaysia between 24th August 1967 and 6th November 1967 by sea and air.

On 16th October 1967, the Battalion officially came under command of the 28th Commonwealth Infantry Brigade. Brigadier P.L. Tancred, OBE, the Commander, reviewed a parade by the Eighth Battalion at Canberra Lines, Terendak Garrison, on 24th November 1967.

Foremost amongst the distinguished visitors to the Eighth Battalion at Terendak was The Right Honorable J.G. Gorton, the Prime Minister of Australia on 13th June 1968.

1. Lieutenant General Sir Reginald Pollard KBE, CB, DSO arrives on the parade at 8.30 a.m. It is requested that all guest be seated by 8.10 a.m.

2. It is customary to stand, and for gentlemen to remove their hats on the following occasions:

a. During the playing of the National Anthem.

b. During the Consecration of the Colours by the Chaplains.

c. During the March Past, when the Colours pass the immediate front of a spectator.

3. The following is for the guidance of guests attending the parade in uniform:

a. During the playing of the National Anthem all rank stand to attention and salute.

b. All ranks salute when the Colours pass during the March Past.